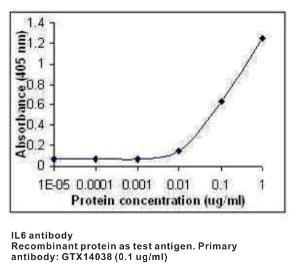 GTX14038
89367-246EA 799.13 CAD
89367-246
Anti-IL6 Chicken Polyclonal Antibody
Antibodies
Interleukin 6 (IL6) is a multifunctional 24 kD protein originally discovered in the medium of RNA stimulated fibroblastoid cells. It is upregulated by IL1, TNF, PDGF, IFN beta, TNF alpha, NGF, IL17 and downregulated by glucocorticoids IL4, TGF beta. IL6 appears to be directly involved in the responses that occur after infection and cellular injury, and it may prove to be as important as IL1 and TNF alpha in regulating the acute phase response. IL6 has also been implicated in regulating adipose mass. IL6 is reported to be produced by fibroblasts, activated T cells, activated monocytes or macrophages and endothelial cells. It acts upon a variety of cells including fibroblasts, myeloid progenitor cells, T cells, B cells and hepatocytes. In addition, IL6 appears to interact with IL2 in the proliferation of T lymphocytes. IL6 potentiates the proliferative effect of IL3 on multipotential hematopoietic progenitors.

ELISA: Use at an assay dependent dilution. WB: Use at a dilution of 1/1000. Predicted molecular weight: 26 kDa. Not tested in other applications. Optimal dilutions/concentrations should be determined by the end user.