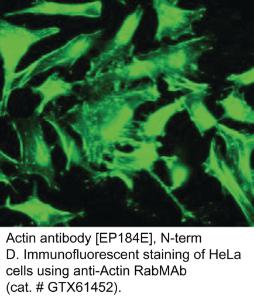 GTX61452
89363-988EA 556.26 CAD
89363-988
Anti-ACT1 Rabbit Monoclonal Antibody
Actins are highly conserved proteins ubiquitously expressed in all eukaryotic cells. They comprise, along with microtubules, a major component of the cytoskeleton. Actin has been found to be expressed in at least six isomeric forms. It is expressed in heart and skeletal striated muscle tissue, and in certain smooth muscle tissues, regulating contractile potentials for these cells. It is also expressed in the cytoplasm of non-muscle cells, functioning to control cell structure and motility . Polymerization of globular actin (G-actin) leads to a structural filament (F-actin), whose formation requires the Arp2/3 complex . It has been reported that actin is hyperphosphorylated in primary breast tumors . It has also been shown that actin dysfunction leads to certain types of heart failure .