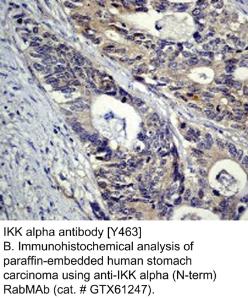 GTX61247
89363-898EA 556.26 CAD
89363-898
Anti-IKK alpha Rabbit Monoclonal Antibody
IKK-alpha (I-Kappa-B kinase-alpha) is a member of the IKK complex which is composed of IKK-alpha, IKK-beta, IKK-gamma and IKAP . Phosphorylation of I-Kappa-B on a serine residue by the IKK complex frees NF-kB from I-Kappa-B and marks it for degradation via ubiquination. Activation of NFKB by TNF requires phosphorylation of IKK-alpha at threonine 23 and serine 176 by AKT1 and NIK respectively . It has been demonstrated that IKK-alpha can accumulate in the nucleus after cytokine exposure . In the nucleus IKK-alpha interacts with CREB-binding protein in conjunction with RELA to be recruited to the NF-kappa-B-responsive promoters in order to mediate the cytokine-induced phosphorylation and subsequent acetylation of specific residues in histone H3 .