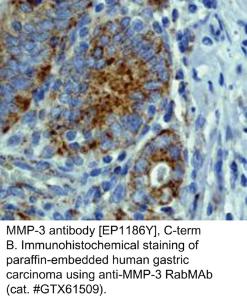 GTX61509
89364-018EA 556.26 CAD
89364-018
Anti-MMP3 Rabbit Monoclonal Antibody
Effective inhibitors of matrix metalloproteinases (MMPs), a family of connective tissue-degrading enzymes, could be useful for the treatment of diseases such as cancer, multiple sclerosis, and arthritis . Matrix metalloproteinase-3 (MMP-3) is a protein involved in tumor invasion and metastasis. MMP3 (stromelysin) is a secreted metalloprotease with a wide range of substrate specificities. MMP3 is synthesized in a preproenzyme form with a calculated size of 54 kDa and a 17-amino acid long signal peptide. Data indicate that the expression and the possible involvement of secreted metalloproteases in tumorigenesis result from a specific interaction between the transforming factor and the target cell, which may vary in different species . In neural studies, matrix metalloproteinase-3 (MMP-3) was newly induced and activated in stressed dopamine cells, and the active form of MMP-3 (actMMP-3) was released into the medium. The released actMMP-3, as well as catalytically active recombinant MMP-3 (cMMP-3) led to microglial activation and superoxide generation in microglia and enhanced DA cell death. .