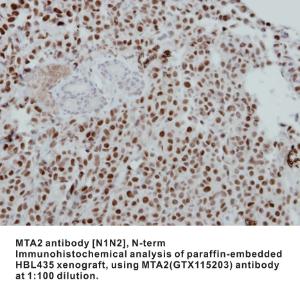 GTX115203
89358-282EA 691.89 CAD
89358-282
Anti-MTA2 Rabbit Polyclonal Antibody
Antibodies
This gene encodes a protein that has been identified as a component of NuRD, a nucleosome remodeling deacetylase complex identified in the nucleus of human cells. It shows a very broad expression pattern and is strongly expressed in many tissues. It may represent one member of a small gene family that encode different but related proteins involved either directly or indirectly in transcriptional regulation. Their indirect effects on transcriptional regulation may include chromatin remodeling. It is closely related to another member of this family, a protein that has been correlated with the metastatic potential of certain carcinomas. These two proteins are so closely related that they share the same types of domains. These domains include two DNA binding domains, a dimerization domain, and a domain commonly found in proteins that methylate DNA. One of the proteins known to be a target protein for this gene product is p53. Deacteylation of p53 is correlated with a loss of growth inhibition in transformed cells supporting a connection between these gene family members and metastasis. [provided by RefSeq]

Suggested starting dilutions are as follows: WB: 1:500-1:3000, IHC-P: 1:100-1:1000. Not yet tested in other applications. Optimal working dilutions should be determined experimentally by the end user.