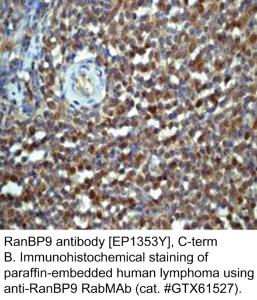 GTX61527
89364-028EA 556.26 CAD
89364-028
Anti-RANBP9 Rabbit Monoclonal Antibody
Just as heat shock proteins function as chaperones for exposed hydrophobic patches, importins act as chaperones for exposed basic domains, and it is suggested that this represents a major and general cellular function of importins . RanBP9, a novel interacting protein, was localized within the centrosome throughout the cell cycle. Overexpression of RanBP9 produced multiple spots which were colocalized with gamma-tubulin and acted as ectopic microtubule nucleation sites, resulting in a reorganization of microtubule network .