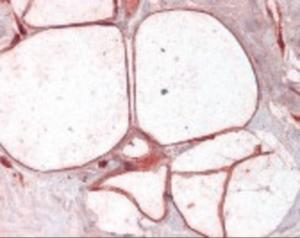 48-742
10074-364EA 1232.7 CAD
10074-364
Anti-CAV3 Rabbit Polyclonal Antibody
Antibodies
Caveolin proteins are components of caveolae plasma membranes found in most cell types. Caveolin-3 is the muscle-specific form of the caveolin protein family whose members are proposed to be scaffolding proteins for organizing and concentrating certain caveolin-interacting molecules within the caveolae membranes. Mutations in caveolin-3 have been isolated which interfere with caveolin-3 oligomerization and disrupt caveolae formation resulting in limb-girdle muscular dystrophy.

Caveolin-3 antibody can be used in ELISA, and immunohistochemistry starting at 5 µg/mL.