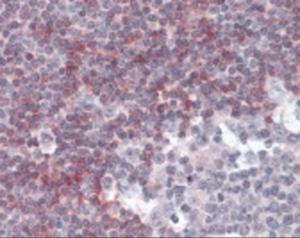 49-149
10078-642EA 1011.8 CAD
10078-642
Anti-TNFRSF13C Mouse Monoclonal Antibody [clone: [11C1]]
Antibodies
Members in the TNF superfamily regulate immune responses and induce apoptosis. A novel member in the TNF family was recently identified by several groups and designated BAFF, BLyS, TALL-1, THANK, and zTNF4. BAFF/BLyS was characterized as a B cell activator since it induced B cell proliferation and immunoglobulin secretion. Two receptors, TACI and BCMA, for BAFF were originally identified. A third receptor was identified recently and designated BAFF-R and BR3 for BLyS receptor 3. Unlike BCMA and TACI, which bind to BAFF and April, BAFF-R/BR3 is specific for BAFF and plays a predominant role in BAFF induced B cell development and survival. BAFF and its receptors are involved in B cell associated autoimmune diseases, and activate NF-kappaB and c-jun N-terminal kinase.

TNFRSF13C antibody can be used in Western Blot, and immunohistochemistry starting at 1:50.

Store TNFRSF13C antibody at 4 °C. Do not freeze.