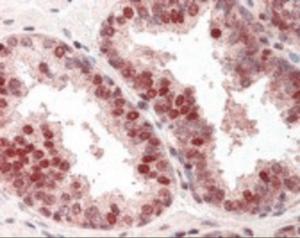 49-475
10079-004EA 1011.8 CAD
10079-004
Anti-RAD52 Rabbit Polyclonal Antibody
Antibodies
The protein encoded by this gene shares similarity with Saccharomyces cerevisiae Rad52, a protein important for DNA double-strand break repair and homologous recombination. This gene product was shown to bind single-stranded DNA ends, and mediate the DNA-DNA interaction necessary for the annealing of complementary DNA strands. It was also found to interact with DNA recombination protein RAD51, which suggested its role in RAD51 related DNA recombination and repair. Four alternatively spliced transcript variants encoding different isoforms have been reported for this gene. The alpha variant encodes the longest isoform that contains an identical N-terminus, but a distinct C-terminus, as compared to other isoforms (beta, delta, and gamma).

Store RAD52 antibody at -20 °C prior to opening. Dilute only prior to immediate use. For extended storage aliquot contents and freeze at -20 °C or below. As with all antibodies avoid freeze/thaw cycles.