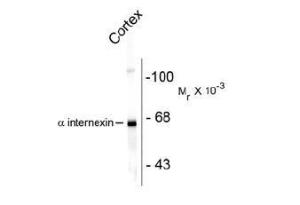 50-251
10075-508EA 938.13 CAD
10075-508
Anti-INA Chicken Polyclonal Antibody
Antibodies
Alpha-internexin is a Class IV intermediate filament originally discovered as it co-purifies with other neurofilament subunits. Alpha-internexin is related to but distinct from the better known neurofilament triplet proteins, NF-L, NF-M and NF-H, having similar protein sequence motifs and a similar intron organization. It is expressed only in neurons and in large amounts early in neuronal development, but is down-regulated in many neurons as development proceeds. Many classes of mature neurons contain alpha-internexin in addition to NF-L, NF-M and NF-H. In some mature neurons alpha-internexin is the only neurofilament subunit expressed. Antibodies to alpha-internexin are therefore unique probes to study and classify neuronal types and follow their processes in sections and in tissue culture. In addition, recent studies show a marked up-regulation of alpha-internexin during neuronal regeneration. The use of antibodies to this protein in the study of brain tumors has not been examined to date, but is likely to be of interest. Recently Cairns et al. used this antibody to show that alpha-internexin is an abundant component of the inclusions of neurofilament inclusion body disease (NFID), a serious human neurodegenerative disorder. The antibody was also used to confirm the presence of circulating auto-antibodies to alpha-internexin in the sera of some patients with endocrine autoimmunity, as well as in some normal individuals.