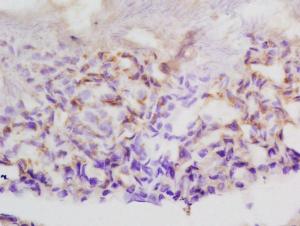 BS-9325R
10486-724EA 796.88 CAD
10486-724
Anti-ASZ1 Rabbit Polyclonal Antibody
Antibodies
Plays a central role during spermatogenesis by repressing transposable elements and preventing their mobilization, which is essential for the germline integrity. Acts via the piRNA metabolic process, which mediates the repression of transposable elements during meiosis by forming complexes composed of piRNAs and Piwi proteins and governs the methylation and subsequent repression of transposons. Its association with pi-bodies suggests a participation in the primary piRNAs metabolic process. Required prior to the pachytene stage to facilitate the production of multiple types of piRNAs, including those associated with repeats involved in the regulation of retrotransposons. May act by mediating protein-protein interactions during germ cell maturation (By similarity).